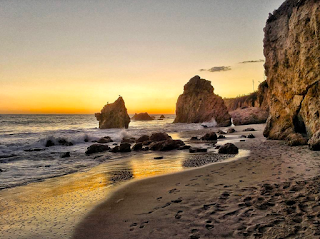 Looking for a smaller and less-crowded beach in Malibu? As a Malibu limo service we serve the beaches here on a weekly basis. With many larger beaches such as Topanga-, Zuma- and Surfrider Beaches, there are no lack of great beaches in the Malibu Area. Learn more about the most popular beaches for our limo- and party bus clientele! We have also included beach filming locations, celebrities living close by and venues where one can combine wine-tasting tours with a day of beaching.

For the nice sunny day you’d like to hang out at the beach, why travel to a crowded beach full of surfers and others? If you would prefer a smaller hidden gem, check out our limousine services’ list of our top choices for Malibu beaches! 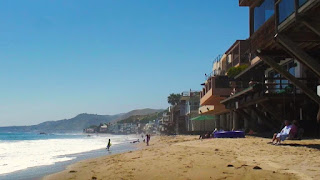 Situated on the northern part of Malibu, the homes around the area are unlike most of these beach communities not located within a gated community, but is among the area’s most expensive real estate. This is also one of the most celebrity-densest areas in LA County. Just a few of the many celebrities residing here include Mel Gibson, Steven Spielberg, Dustin Hoffmann, Goldie Hawn, Kurt Russell, Danny DeVito, Eddie Van Halen, Charlie Sheen, Sylvester Stallone and many more. The access to this public beach is located 1 mile from Zuma Beach, with a pathway located at 31300 and 31200 on Broad Beach Road. Despite wealthy homeowners’ efforts to restrict access to Broad Beach, there have become more easily accessible entries to Broad Beach in recent years. Connected to Zuma in the north, Broad Beach resembles Zuma but is smaller and less-crowded than its southern counterpart. A racing scene from 2001 film The Fast and the Furious was filmed here, where Vin Diesel races a Ferrari on the way to Neptune’s Net. 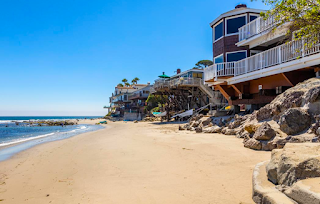 Latigo is located right after entering Latigo Shore Dr., just west of Corral Canyon and east of Latigo Point. It is famous for its many gorgeous beach homes and its A-rated water quality. In fact, some days there are up to 40 feet of ocean visibility which makes for great scuba diving and snorkeling. Its private location makes for a great sunbathing experience, and as it’s sheltered by Latigo Point and has a fewer waves than most Malibu beaches, Latigo makes for a great beach for swimming. As there are many houses and apartments located here, parking along the Pacific Coastal Highway might be your best parking option to avoid neighbor complaints. The beach has been featured in various films. Zachary’s home in Mildred Pierce (1945) is located at the beach, and it’s the location of where Spencer is pursued in the end of It's a Mad Mad Mad Mad World (1963). Joseph’s home in the 1973 film Messiah of Evil is also located here, and so is a waterfall seen in Tourist Trap (1979). The gas station from It's a Mad Mad Mad Mad World is a popular stop for cinematic tours by limousine services. 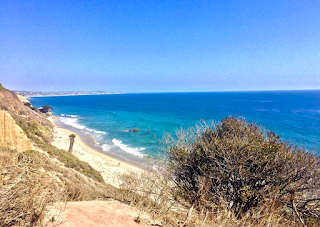 This narrow sandy beach actually translated from Spanish into “Hidden Beach”! One of the most beautiful gems in the Malibu area, nearby homeowners have fought unsuccessfully for decades (as seen on CNN, LA Times, The Guardian and elsewhere) to keep beachgoers away from the beach. You may need to ignore a few signs, but rest assure that anyone can access to this beach. Located just below the bluff from the Geoffrey’s Malibu restaurant, visitors will have to park on PCH just before the restaurant to venture down here. Being top rated for water quality, scuba diving and snorkeling are common activities for party bus and Malibu limo service customers who travel out here. As recently as yesterday we took clients here from Malibu wine-tasting tours in the canyons. 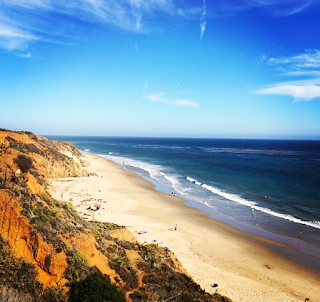 Named for downwards path leading here, Staircase Beach is found on the northern end of Leo Carrillo State Beach. The beach is relatively rocky and maybe most visited by surfers, windsurfers and paddle-boarders. As there are no signage for the beach it is easily overlooked, but those who discover this beach will fall in love with its magnificent cliffs, white sand beach and gorgeous rock formations. Staircase Beach may be reached from the parking lot at Leo Carrillo State Beach and from a trail going from the North Beach Campground. The beach is located close to a great seafood restaurant, namely the Neptune’s Net. Enjoy the zigzag trail down to this rocky hidden gem of a Malibu beach! Often named amongst the most gorgeous beaches in California, our Malibu limo service often has limousine- and party bus vehicles heading to Staircase Beach. 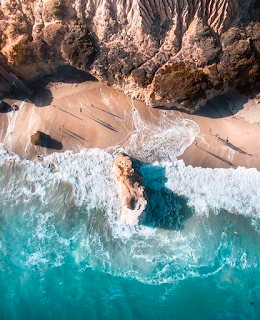 Ordering party bus- and limousine services to visit the El Matador State Beach has become as popular as visiting the larger beaches. Being a more known stretch of beach than the others mentioned in this article, El Matador is a more known “hidden gem”, but still less visited than most beaches. With it’s gorgeous rock outcroppings, sea caves and mountain cliffs, bringing the camera along for photographing is a must when visiting El Matador. The hike down to the beach is steep and uses several staircases. Being so far down from the Pacific Coastal Highway, the beach is completely separated from the noise of the freeway and has an unusually secluded character for an LA County beach. The forty-acre beach is one of the three beaches that make up the Robert H. Meyer Memorial State Beach. Come here early to be guaranteed parking at the 40-space parking lot. While there are no shops or restaurants nearby, the beach parking lot is equipped with restrooms and even picnic areas overlooking the coast. Come here for a quiet and scenic beach with beautiful surrounding nature that’s ideal for photographing. Our top rated Malibu limo service often transfer wedding clients here for an ideal secluded and naturally gorgeous place for wedding photographies. The two additional Robert H. Meyer Memorial State Beaches - La Piedra Beach and El Pescador - are smaller than El Matador, but maybe not as picturesque. El Matador has been featured in a variety of movies, making it a desired destination for limousine services on cinematic tours of Malibu. While it is featured as the coast of South Carolina in The Notebook (2004), while it is dubbed for Mexico in True Romance (1993). The fictional Towers Beach in Spellbinder (1988) is actually El Matador, while the beach also can be seen in A Lot Like Love (2005) starring Ashton Kutcher. 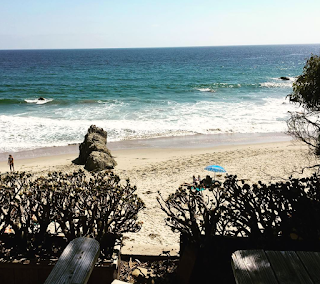 An even lesser known beach is Lechuza Beach, situated at the northern end of Broad Beach Road. Known for its gorgeous rock formations and secluded character, it is found just a little ways up from Broad Beach. The long walking path takes you from the Bunnie Ln. and Broad Beach Rd. intersection and down to the beach. Unlike most other beaches in the area, Lechuza Beach isn’t connected to other beaches and is therefore a true hidden Malibu gem. Our Malibu limo service has often transferred beach-goers here as the beach lacks its own parking lot. Although there are no public restrooms or showers here, you can take easily take a stroll from the beach to the nearby Starbucks and gas station on PCH and Broad Beach Rd. Its naturally rocky coastline, seclusion and tons of vegetation resemble a Pacific Island more than an LA County beach!

If none of these were particularly intriguing, check out Orange County’s Thousand Steps Beach for one of Southern California’s most scenic beaches. A popular activity for many of our clients in Malibu is to combine wine-tasting tours with a day at the beach. Located right across the PCH from Topanga Beach is where we find the Rosenthal Wine Bar & Patio, a wine-tasting room that offers great views of the Pacific Ocean. Further inland you can venture on wine-tasting tours to wineries such as Malibu Family Wines, Cornell Winery & Wine-Tasting Room and SIP Malibu Grapes. For those who prefer an even more secluded beach than those mentioned here, ordering limousine services to visit the California Channel Islands might be your best choice. Whether to visit the peaceful white sand beaches of Santa Rosa Island or to explore the coastline of Catalina Island, a Malibu limo service can get you to the dock in style!

We are servicing all of Southern California and all its beaches, but please keep our limos clean from sand! Whether for local wine-tasting tours, party bus nights out, LAX transfers, wedding transportation or any other limousine needs, contact our limousine services today for an immediate and free quote.